Like most horse owners, I have tried different beddings and am always on the look out for an economical and time saving solution that will help me get through the winter with 'Dirty Bertie'. As his nick name suggests, Bertie is quite a wet horse in the stable, which has meant that straw, although the most economical to use, isn't absorbent enough and shavings proved too expensive for such a wet stable. So after my friend told me about Flax Core, I thought I would give it a try. 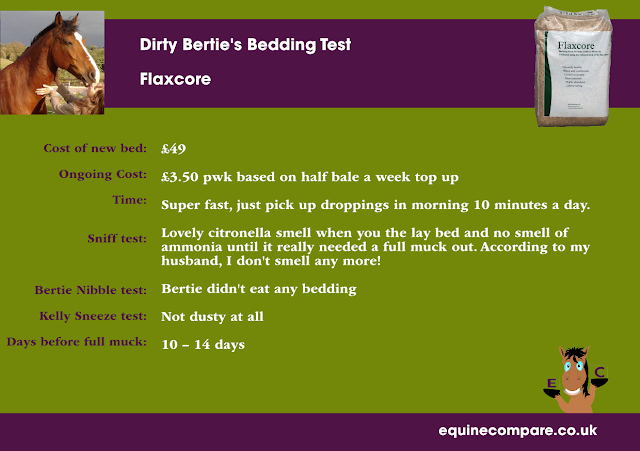 I aimed for a deep litter bed with the Flax Core to save time. For my 10ft x 12ft stable, 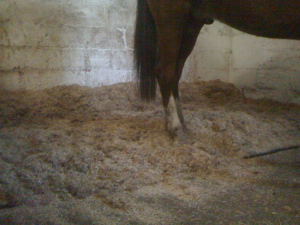 with matting I used 7 bales of Flax Core at around £7 per bale. This gave me a decent size bed with banks of adequate depth. I think if I didn't have decent stable mats, I would have easily used 8 bales.

The first thing I noticed was the lovely smell, everyone in my barn commented on how nice the bed smelt when they walked past, to which I replied “It won't smell like that in the morning”. I honestly didn't think it would be any better than shavings and expected to find a smelly, wet bed in the morning. 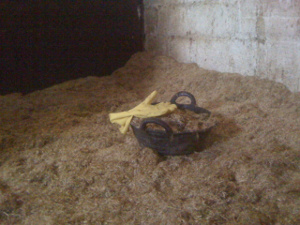 Pleasantly surprised! No smell of ammonia and after a full night in, I couldn't even see any wet patches. I picked up the droppings using marigolds and used a rubber feed skip so that I could crouch down and then load the wheel barrow. This saved a lot of time and allowed me to skip out while Bertie was still in the stable. After skipping out, I went home and let my husband do a sniff test! I used to come home reeking of ammonia after skipping out but I couldn't smell it on me and neither could my husband. Result!

The full muck out 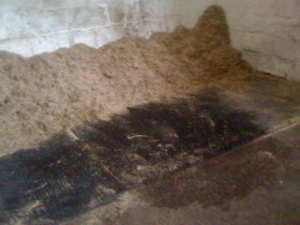 uncovering the wet bedding. At first I used a shavings fork to dig out the wet but found this was hard going. So I used my shovel instead and it was much easier. A few smelly barrow fulls later, the wet was removed. I moved the old bedding into the middle and added a bale of new Flax around the edges so that the bedding didn't get stale around the edges.

Hemp Technology who manufacture the bedding recommend two ways of using Flax Core bedding effectively You can have a deep litter bed like I have or have a thin layer over rubber mats, which you muck out every day.

I later discovered that the bedding smells so nice because it is has citronella in it. Neil Crow from Hemp Technology who make Flax Core, said, "We add Citronella to the bedding as the smell helps to deter rodents and citronella has anti-fungal properties. This makes the bedding especially beneficial to the barefoot horse." 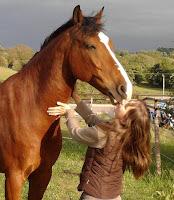 I would, and have recommend this bedding to other horse owners, as long as they don't treat it like a shavings bed and try digging it out regularly. If you leave the bed undisturbed, a deep litter bed will stay clean and fresh for 1 - 2 weeks, depending on your horse. It is by far, the most absorbent bedding I have tried on Bertie so far. Its also an added advantage that you can start introducing Flax Core to your existing shavings bed without having to throw out your bedding, so its easy to give it a try without spending a fortune.

Have you tried Flax Core?

If you have already tried FlaxCore, leave a quick horse bedding review on Equine Compare.
We have selected a lucky horse owner to try Flax Core, watch out for her review, coming soon.